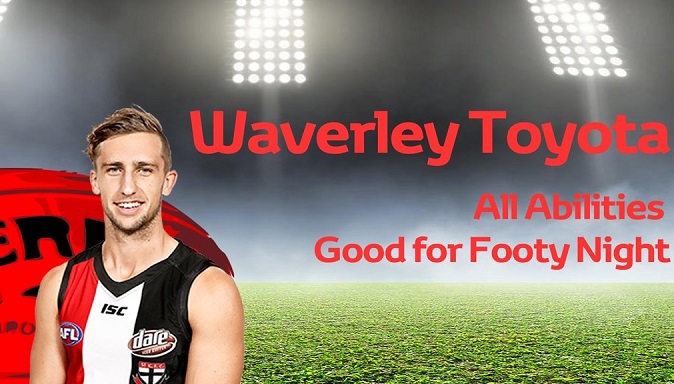 St Kilda star midfielder Luke Dunstan has coached the Waverley Toyota Mazenod Panthers All Abilities team to victory over the Mazenod Legends.   Luke stepped in as guest coach of the Panthers in their exhibition game over the Legends in an epic contest at Central Reserve under lights on 15th May.

Despite a massive effort from the Mazenod Legends, the Panthers were able to prevail with the final score 5.5.35 to the Panthers against the Legends effort of 2.3.15. in a front of a crowd of approximately 500 people.

Panther’s captain Mark Vanderven said: “It was a great result, we had to work hard to beat the Mazenod Legends.  Being coached by a current AFL star in Luke was an experience I will never forget and his insights will help me and all the players improve our footy”.

The exhibition game was played as part of the Toyota Good for Footy round.  The game was played to highlight to the local community that anyone with an intellectual disability everyone can play AFL footy if they want to.

Key stakeholders from disability support organisations played a key role on the day setting up pop stands.   Participants were provided with job and career support from organisations like Wise Employment, OC Connections, and Kevin Heinze Grow Gardening Centre.  Active Monash provided participants with advice on their range of exercise programs for people of all abilities and a great BBQ provided by Fedele’s Ristorante Italiano.

Phil Ryan, Mazenod Panthers President said of the night: “It was great to see Luke and the AFL and Toyota giving back.  The attendance by the other stakeholders on the night really showed what the community can do when we put our minds to it.  Having the other community organisations come down and support the night really added to the fabric of the night.  We are looking forward to an even bigger event/game in future games.”

Luke Dunstan said of the experience: “Getting back to a community footy club like Mazenod was a lot of fun. Being able to share some of my knowledge with local clubs is a great part of being an AFL footballer and it was an absolute pleasure to coach and guide them. It’s only a small time out of my day, but to put smiles on the faces of everyone who took part was great. It was also really awesome to see Mazenod making football available to everyone, including those with a disability, which is a real credit to the club. Local footy clubs like Mazenod are the grass roots of the AFL and I really enjoyed my time with the club.”

The exhibition game was only made possible through the considerable support of team sponsor Waverley Toyota.  Waverley Toyota Dealer Principal, George Stefanou, added: “Waverley Toyota is a proud supporter of the Mazenod Panthers. We hope to raise awareness as well as encourage more players with all abilities to be involved in football and hope that more companies come on board to support these great non-profit organizations that work so hard to provide players with an environment that promotes fitness, fun, friendship and a sense of belonging”

Previous
Back to Blog
Next